Who here hasn’t heard of the acclaimed TV series Vikings? Once it came out, it took the world by storm. There are millions of people all around the world that are positively in love with this series. Now, NetEnt has made a game bearing the name and theme of this show. And NetEnt is known for taking popular TV shows and turning them into popular slots. The players respond very well to this idea, as shown by the popularity of these games.

Now, if you have seen the show, you will immediately slide into the story of the game. The first thing that you will note is that the game has the same atmosphere of the show. You will feel like you’re in the battle lines in the world of the Vikings. The music also adds to the atmosphere. Symbol design is phenomenal. Practically everyone that loves the show will feel that the game has done the show justice. And it offers a unique take on the whole Viking formula. 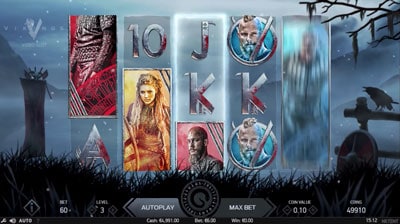 Now, as for the gameplay, it can be a little underwhelming. Fans of the show will expect swashbuckling action and a lot of intrigues. But there is none to be had in the game. There is a special shield feature that activates every once in a while. It looks very good. Various symbols will be covered by shields. Once the shields fall off – the covered symbols will all turn into a single symbol. And this, in turn, will help you make big winning combinations.

There are also the raid spins that you can access in the game. The great thing here is that the entire game changes. In the beginning, you have 5×3 reels with 243 ways to win, in total. But if you can access the raid spins, there will be a new setup. Now, there will be a 7×5 reel set. And how much pay lines do you think the game will have in this situation? Perhaps 1,000? Maybe 5,000? You will now have incredible 78,125 ways to win. And this is one of the most exceptional features that Viking by NetEnt has.

Do Vikings by NetEnt do the show justice? Most certainly. We think that it covers the entire atmosphere beautifully. You will feel like you’re playing the show. But we still think that NetEnt could have created a few more features. This would have made the game live up to the name of the show.